By Prime Plus MortgagesDecember 15, 2021Blog, Real Estate
One Comment 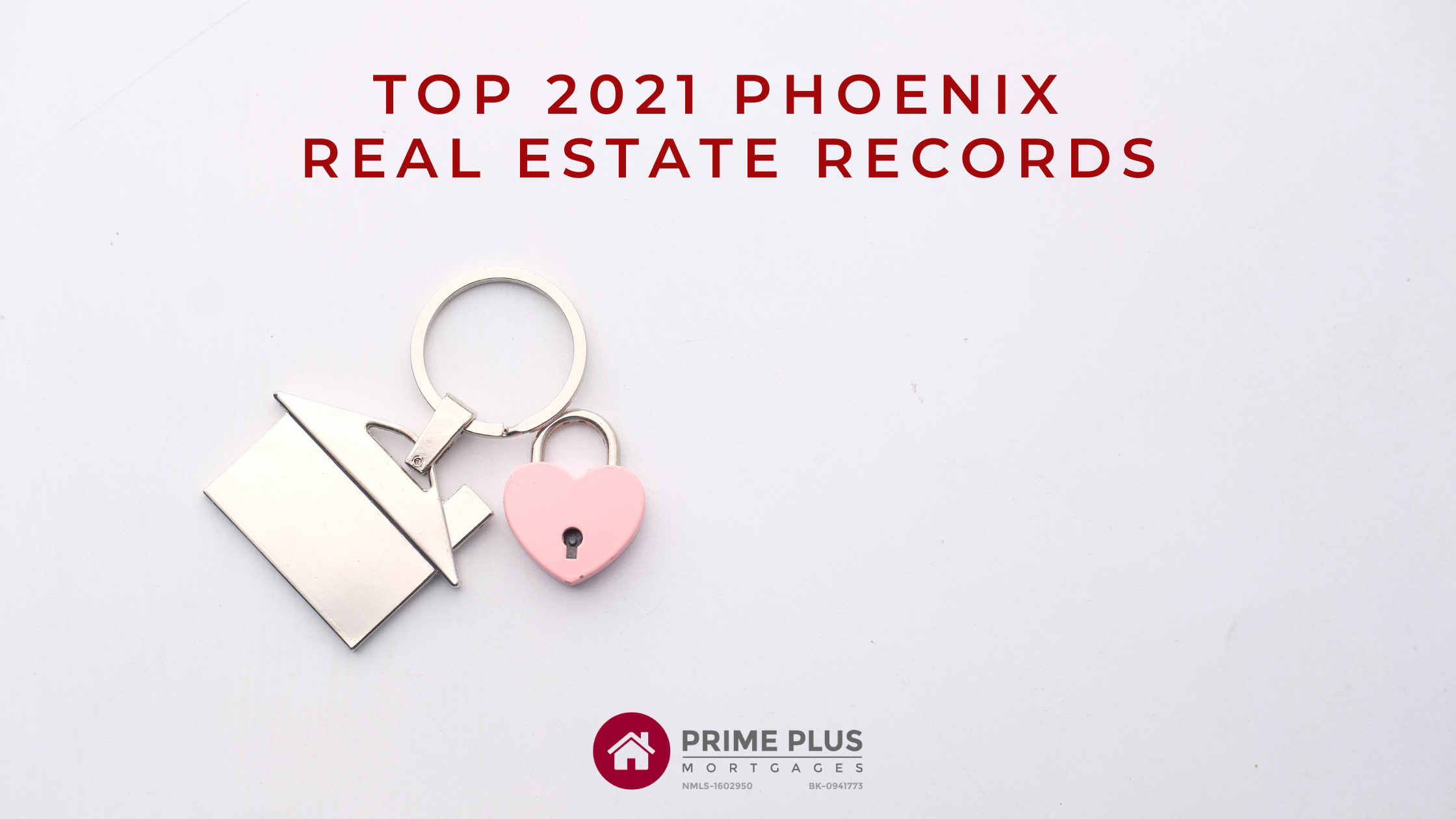 2021 has been a record-breaking year for Phoenix real estate. Whether it was for top states to move to, or even Home sale prices increase, Phoenix is one of the top real estate markets to watch.

With new records being set almost every month, we recap the top records set for Phoenix that you need to know for 2022!

Earlier this year, Phoenix ranked as the second hottest real estate market in the nation. Phoenix ranked second for the hottest housing market in 2021, following Austin, Texas, according to Zillow’s latest report.

Phoenix’s recorded annual appreciation was second-fastest in August 2021 at 31.8%. Zillow says the typical Phoenix-Mesa-Scottsdale Metro home value is $418,170 and it has increased by 32.7% over the past year. Phoenix was also the fastest growing city in the United States from 2010 to 2020 according to the U.S. Census Bureau.

With rising home prices and a steady influx of new residents, Paradise Valley is seeing rising appreciation rates, and Phoenix is set to have a strong market in 2022.

Arizona was ranked the second-highest home equity in the nation, according to ATTOM third-quarter 2021 U.S. Home Equity & Underwater Report, which shows that 39.5% of mortgaged residential properties in the United States were considered equity-rich.

States with the biggest home equity increases were:

Across the country, 46 states including the District of Columbia saw equity-rich levels increase from the second quarter to the third quarter of 2021.

Phoenix #3 In Nation For House Flipping

Phoenix continues to be the hotbed for real estate investing opportunities. Phoenix ranked as the third in the nation for home flipping and broke records for home price increases.

In the second-quarter 2021 U.S. Home Flipping Report, ATTOM showed that 79,733 single-family homes and condominiums in the United States were flipped in the second quarter. Those transactions represented 4.9% of all home sales in the second quarter of 2021, or 1 in 20 transactions was a flipped home. In this report, Phoenix ranked as the # 3 market for the most home flipping with 8.1% of homes sold being a flip.

Rentals had a great year as well in Phoenix. By comparing the affidavits of value from  August 2021 with August 2020 in Maricopa County, sales of homes intended to be rented are up 97%.  According to ARMLS listings, The average rental price per square foot has increased from $1.00 in September 2019 to $1.36 this month. That is a 36% increase in just two years.

The top 3 selling cities in Metro Phoenix, based on price per square foot for home sales:

The average $/SF for listings under contract in Phoenix is up more than $10 over the past 2 months and set a new all-time record.  The monthly average sales price per square foot for closed listings and is also up around $10 over the past 2 months, with a record high on Monday last week. Nationally, the median home-sale price increased 13% year over year to $355,600.

Phoenix continues to be one of the top destinations to move to according to a RedFin report. Nationwide, 29.5% of Redfin.com users looked to move to a different metropolitan area in October. Phoenix ranked #2 for a top moving destination nationally, and #1 destination for people moving from Los Angeles. Miami, Phoenix, Sacramento, Las Vegas, and Tampa were the most popular migration destinations of any major U.S. metros in October!

The top 5 states moving to Phoenix are:

According to the latest Census five-year estimates covering the 2015-2019 period, Arizona drew 266,648 migrants from other U.S. states each year.

What was the most surprising 2021 Phoenix Real Estate Records?

With one of the hottest real estate markets, now is a great time to invest in real estate! Our Hard money loans make it easy to make fast offers and get same-day approvals for your next investment. Whether it’s a rental, flip, or rehab, we have a hard money loan option to fit your needs.  Apply now to get approved for your hard money loan today!